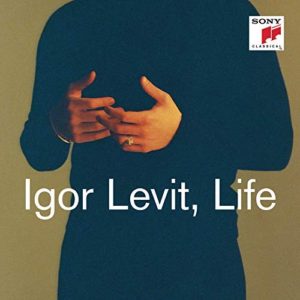 At last, a new Igor Levit album – and as was to be expected, in XXL format once again. The Berlin-based 31-year-old loves the big and complex, even physically challenging tasks. It is not for nothing that he describes himself as a “maximalist.” His first three Sony productions, all highly acclaimed, involved some of the greatest groups of works in the canon for solo piano: Beethoven’s late piano sonatas, Bach’s six Partitas, and the three most impressive piano variation works in the history of music.

Now, for the first time, a very personal selection of works deliberately made up of associatively composed works follows, recorded in the spring of 2018 in Berlin’s famed Jesus-Christus-Kirche so well-known for its acoustics, on an excellently tuned new Steinway grand. Levit presents an imaginary recital encompassing a tremendous emotional range, extending from the intimate (Schumann’s “Ghost Variations” (Theme and Variations in E-flat major) or Bill Evans’s “Peace Piece”) to the sublime and monumental (Liszt-Busoni’s “Ad nos”). More than ever, the individuality and insatiable curiosity of the young artist becomes apparent. The passionate intellectual presents himself as an equally adventurous and passionate guide through musical regions in which the great questions of human existence arise – questions about meaning and duration, about inner peace, memory and salvation.

Three years have passed since he pulled off a CD hat-trick with three variation cycles by Bach, Beethoven and Rzewski. Among other accolades, it was named “Gramophone Recording of the Year.” Much has happened in the meantime. Levit is one of the most active soloists of our time on international concert podiums. For example, in the 2017/18 season he toured Asia with Kirill Petrenko and the Bavarian State Orchestra. He also performed in a series of concerts with the Deutsche Kammerphilharmonie Bremen. Levit regularly appears in chamber music concerts, but the focus of his work is still solo recitals. Hardly any young pianist can perform such a demanding and wide-ranging repertoire as convincingly, in which, in addition to masterpieces of the repertoire such as all 32 sonatas by Beethoven, he repeatedly performs pieces “which most of his colleagues would never perform in public,” as the Süddeutsche Zeitung recently said approvingly in a portrait.

In any case, the musician, who has strong political and social opinions, is definitely a presence in the media. Within a few years he has matured in the public perception to an interpreter who not only wins audiences over with the acclaimed pedigree of his musical performances, but because as a personality he exudes his explicitly humanistic attitude.

In the United States he was named the recipient of the prestigious 2018 Gilmore Artist Award – worth $300,000 – which is awarded only every four years. “Igor Levit is not only a superb pianist but also a deeply thoughtful and insightful artist, and he made a deep impression on all of us who followed his performances over the last three years,” said the jury about selecting the German pianist, who was born in 1987 in Nizhny Novgorod (formerly Gorki), Russia. According to the New York Times, Levit received the award for “his potent mixture of powerful art and political candor.”

This new CD release has nothing to do with politics. It turns inwards: In Life magazine, Levit shares some of his personal reflections of past years with his audience. Triggered by the tragic death of a close friend in an accident, Levit’s piano playing reflects upon an experience of loss encompassing grief, despair, resignation and solace. He concentrates on works whose gloomy grandeur and melancholy beauty have occupied him for years. Each of them pays tribute to the virtuoso possibilities of the piano. Poetic moments of contemplative silence blend with life-affirming and extremely sensual music with a direct physical fascination.

Levit’s strongly subjective selection of works ranges from 1720 to 2012, from Bach to Frederic Rzewski. The focus is on Ferruccio Busoni and his wonderful Bach transcriptions, the breakneck difficulty of his piano version of Ad nos ad salutarem undam for organ by Franz Liszt and Busoni’s own “Berceuse.” Busoni, the Italian cosmopolitan with German roots, eminent pianist, universal musical genius and inspiringly utopian champion of truly “free” music, is one of the great models for the musician Igor Levit. The title of the album is based on a piano piece by the American Frederic Rzewski, composed a few years ago by Rzewski in memory of a friend who was a New York performance artist; this is the world premiere recording.

Gently and with the utmost inner calm, Igor Levit’s new album transcends the boundaries between epochs, styles and genres, and in doing so offers a wealth of discoveries. It mourns – in the form of a hymn to life.

Diana Damrau is awarded the OPUS KLASSIK as “Singer of the Year”...
Scroll to top