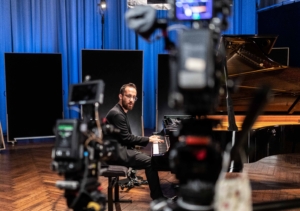 The Gilmore streamed the concert together with the American magazine NEW YORKER and the German Der Spiegel under the following links:

Since mid-March, cultural events all over the world have come to a halt due to the corona pandemic. Up till now, there are almost no guidelines under which theatres, concert halls or cinemas might be able to operate again in the foreseeable future. For countless performing artists worldwide, this Covid-19 crisis is existential: musicians are no exception.

The cultural landscape worldwide is withering.

To raise awareness for the plight of artists worldwide, pianist Igor Levit performed a concert that will transcend geographical borders and time zones. On Saturday, May 30th at 2 pm (CET), he performed at the b-sharp-studio in Berlin one of music history’s longest compositions: Eric Satie’s “Vexations” (French for “agony”), which lasts approx. 20 hours.

Igor Levit: “It has always been a strong wish of mine to be able to perform Eric Satie’s Vexations. While written in the 19th century, this piece was revolutionary thanks to its atonal harmony. The few notes – a theme and two variations – fit on just one sheet. The 840 repetitions though herald early on a future of aesthetic repetitiveness.

The sheer duration of over 20 hours of “Vexations” doesn’t feel like a “nuisance” or “torture” to me, as the title would suggest, but rather a retreat of silence and humility. It reflects a feeling of resistance.

That’s why it feels right to play the Vexations right now. My world and that of my colleagues has been a different one for many weeks now and will probably remain so for a long time. Vexations represent for me a silent scream.

Igor Levit is financing the project with the funds of the Gilmore Award granted to him in January 2018. The Gilmore artist award is one of the most distinguished music awards for classical pianists.

So that his audience can still experience him live, Igor Levit streamed 52 Social Media House Concerts via Twitter (link) every evening from March to May .

“Igor Levit is now using his art decidedly against fear. Against all our isolation, timidity and perplexity in times when freedom is actually being restricted as never before. (Alex Rühle, “Chaconne in sneakers”:  www.sueddeutsche.de)