The Hungarian cello player Laszlo Fenyö, born in 1975, belongs to the world elite of cellists since he won the International Pablo Casals Contest of 2004 in Kronberg, Germany. He is hailed as one of today’s most exciting artists by his audience and critics. So it is no wonder that the Westfälische Allgemeine Newspaper designated him as an “all-rounder”. Possessing the unique capability of presenting the intentions of the composer, he captures and fascinates his audience. Through his breathtaking technical skills and emotive expressiveness, his concerts become special experiences, where the music can be newly explored with each concert.

In the last few years Laszlo Fenyö has performed on the most renowned stages throughout the world, including the Concertgebouw in Amsterdam, Wigmore Hall in London or the Gasteig in Munich. He is regularly on tour with the leading symphony orchestras from Europe and Asia. In addition he has performed many times with conductor Krysztof Penderecki with whom he had an intensive cooperation.

In Hungary, his home country, Laszlo Fenyö is long ago one of the most sought-after soloists; his performances – solo recitals, chamber music events and concerts with orchestras, are broadcast live and recorded by the Hungarian Radio. He played with most of the Hungarian orchestras and conductors. In 2005 he received the famous Franz Liszt Prize awarded by the Hungarian Ministry of Culture, as well as the Junior Prima Prize in 2008.

Laszlo Fenyö started his musical education in Hungary. Already at the age of 13 he became a junior student with Professor Laszlo Mezö at the Franz Liszt Academy of Music in Budapest. Later, while continuing his studies in Lübeck with Professor David Geringas, his brilliant technique, secure sense of style, and his unusually broad repertoire, brought him several prizes at important competitions. Such as the International Music Contest in Geneva, the Rostropovich Contest in Paris, the Adam Cello Contest in Christchurch, and the Contest of the Hungarian Radio in Budapest.

After completing his studies, he decisively extended his musical horizon under the tutelage of Bernard Greenhouse.

Laszlo Fenyö started his career as soloist in the hr-Sinfonieorchester of Frankfurt. For the last couple of years he has turned more and more intensively to teaching. He gives master courses all over the world and since april of 2012 he works as Professor in the Academy of Music in Karlsruhe, Germany.

Laszlo Fenyö released two CD’s: Chamber music with the pianist Oleg Poliansky by Aulos/Musikado, and the cello concertos of J. Haydn (D Major) and Dimitri Schostakowitsch (No. 1) accompanied by the hr-Sinfonieorchester, conducted by Grant Llewellyn, released by hr.music.de.

Laszlo Fenyö plays a cello made by Matteo Goffriller from 1695. 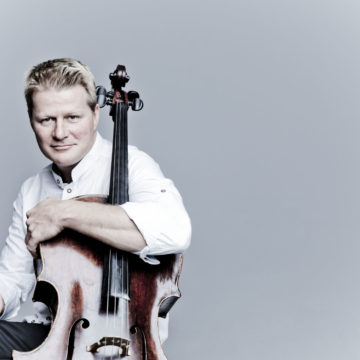