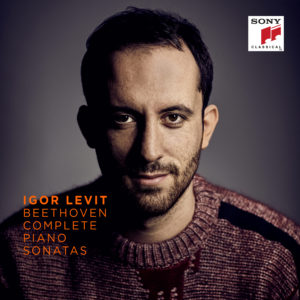 Igor Levit’s work on the 32 Beethoven Piano Sonatas has been the most important endeavour of the past 15 years of his life. This autumn will see his new studio recording of the complete sonata cycle released on Sony Classical on September 13 and represents the recorded testament to almost half his life spent in the study and performance of these sonatas. The release of this momentous 9-album cycle is one of the most eagerly awaited recordings for the 250-year Beethoven anniversary.

No other composer has had such an important influence on Igor Levit’s life as that of Ludwig van Beethoven. He admits that this composer’s music is around him practically every day and in almost everything he does. The profound impact of Beethoven’s music – since his first emotional-point-of-no-return with the Missa solemnis at age 13, followed by his first dedicated work on Sonata op. 2/2– has subsequently shaped Levit’s approach to almost all music, whether he is playing Liszt, Shostakovich or Rzewski.

Naturally Beethoven features prominently in Levit’s upcoming calendar – the summit being his performances over the next two seasons of the complete sonata cycle in the Lucerne Festival (launching in August), Hamburg’s Elbphilharmonie (launching in September) and Stockholm’s Konserthuset (launching in February 2020). Levit will also present all-sonata recitals, amongst others, at New York’s Carnegie Hall, Washington’s Kennedy Center, Chicago Symphony Center and San Francisco Symphony’s Davies Hall in May 2020.

Igor Levit will be awarded on 13 October 2019 the OPUS KLASSIK in the categroy Instrumentalist of the Year (piano)  for his CD “LIFE” .