Luisi has performed as a guest conductor with the following internationally renowned orchestras: Bavarian Radio Symphony Orchestra, Vienna Philharmonic, Chicago Symphony Orchestra, Boston Symphony Orchestra, Philadelphia Orchestra, Cleveland Orchestra, San Francisco Symphony, Concertgebouw Orchestra, Staatskapelle Berlin, Oslo Philharmonic Orchestra, Orchestre de Paris, Philharmonia London, NHK Symphony Tokyo, Munich Philharmonic, Santa Cecilia Orchestra, Rome, and the Mahler Chamber Orchestra. He is also a frequent guest at the Vienna State Opera, the Bavarian State Opera in Munich, the Deutsche Oper Berlin and the Staatsoper Berlin. In 2002 he débuted at the Salzburg Festival with Richard Strauss’s Die Liebe der Danae and returned there the following year with Die Ägyptische Helena by the same composer. Luisi gave his début in the United States in 2000 at a concert with the New York Philharmonic Orchestra, followed by a new production of Verdi’s Rigoletto at the Lyric Opera Chicago. He conducted at the Metropolitan Opera for the first time in 2005 (Verdi’s Don Carlo).

In 2011, Fabio Luisi conducted new productions of Don Giovanni, Siegfried and Götterdämmerung (2012) at the Metropolitan Opera, as well as Das Rheingold, Ariadne auf Naxos and Rigoletto. He conducted the Met’s productions of Don Carlo and La Bohème during a tour of Japan. He débuted at the Royal Opera House Covent Garden with Aida, and at the Gran Teatre de Liceu in Barcelona with Falstaff. He also conducted a tour of the United States with the Vienna Symphony Orchestra and conducted concerts with the Philadelphia Orchestra, the Mahler Chamber Orchestra, the Concertgebouw Orchestra (with which he gave guest performances at the Gustav Mahler Festival in Leipzig), the Cleveland Orchestra, and a production of Leoncavallo’s Pagliacci at the Teatro Carlo Felice in his hometown of Genoa. In the coming months he will conduct a new production of assenet’s Manon at the Met, and give his début with this opera at the Teatro alla Scala in Milan. Luisi’s CD recordings include Verdi’s Aroldo, Bellini’s I puritani, as well as all the symphonies and the oratorio Das Buch mit sieben Siegeln by the forgotten Austrian composer Franz Schmidt. There are also recordings of various symphonic poems by Richard Strauss and a much-lauded recording (Echo Classics Prize 2009 for the best symphonic recording of the year) of Bruckner’s 9th Symphony with the Staatskapelle Dresden. 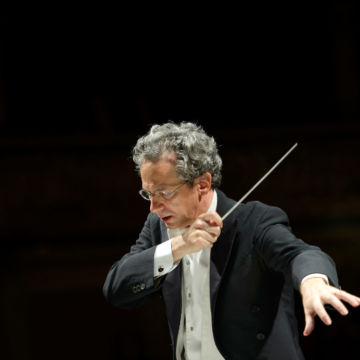 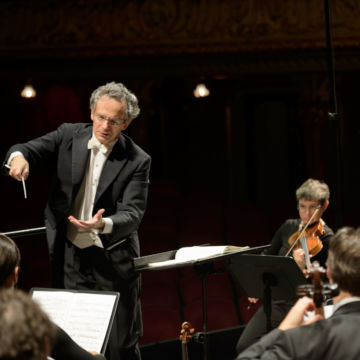